I am a huge fan of Beyoncé. Like, HUGE fan. I include her words of inspiration in many of my corporate speaking presentations. My damn last name is Carter. The CATCHPA for the first version of my website was her name.

Whenever I’m asked during an event, like Create & Cultivate (pictured below) who’s music I want to come out to, I always say “Run The World (Girls)” by Beyoncé. 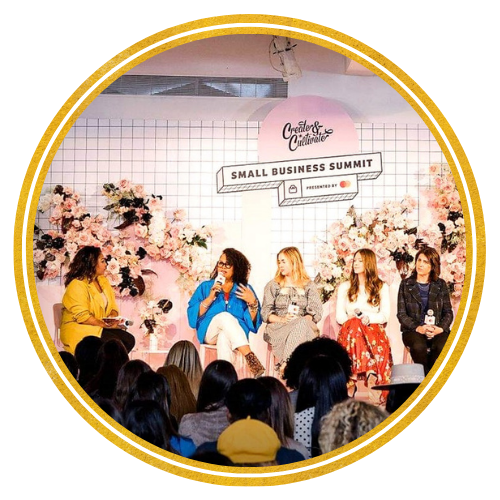 I’ve been know to watch her documentaries, like, a LOT.

My toxic trait thanks to @strongblacklead is watching HOMECOMING: A film by Beyoncé at least one Friday a month for inspiration and motivation pic.twitter.com/aJireR8kCS

My love goes BEYOND what I can SAY (see what I did there ’03 Dangerously in Love fans?), so it was quite easy to think of ten times Beyoncé got me together and made me feel like I could handle working motherhood. Times she made me repeat what her director and choreographer Frank Gatson Jr. said, “if you gonna come into my lane, make sure you put your blinker on.” 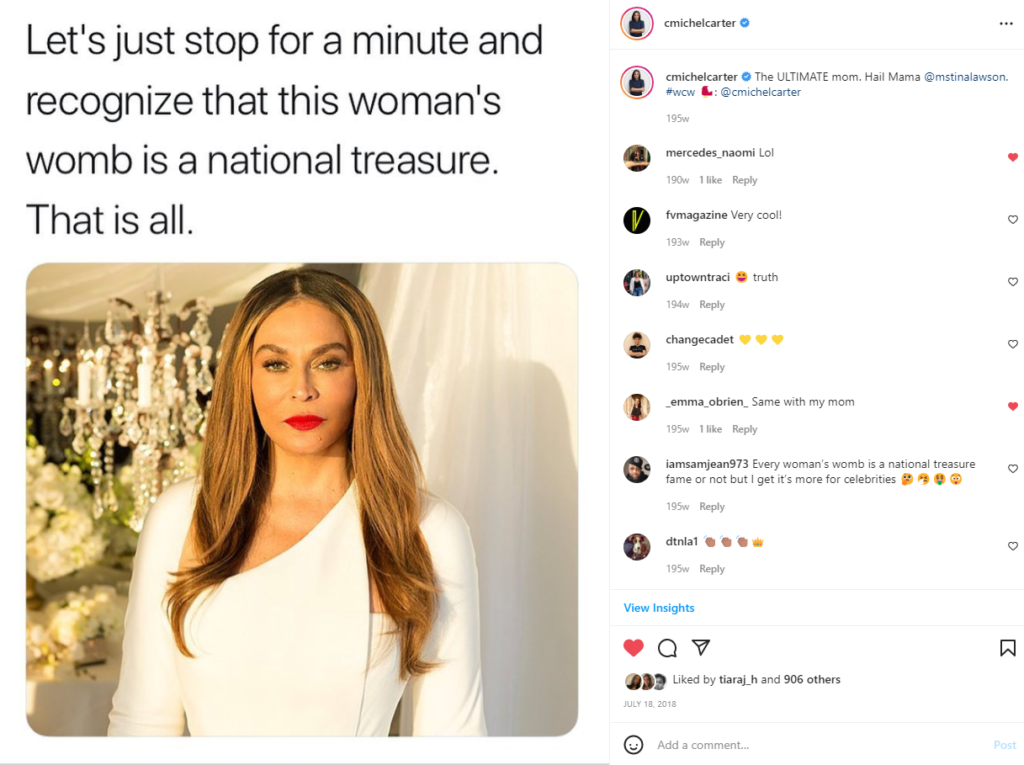 Like I said, Beyoncé Giselle Knowles-Carter, or Ms. Tina’s daughter (who she got this shit from and who I’ve had the pleasure to interview), has been my inspiration since 1997. Why would you try her? Why even bother?

Here’s how Beyoncé keeps me motivated as a mom. I mean, I’ve even covered this for ForbesWomen. How cute?!

#9: Whenever she breaks “Sasha Fierce” character for Blue.

My heart melts when Blue Ivy says “Good job B!” at the end of “Daddy Lessons.” Or head to the 4:50 mark of this video and tell me your heart doesn’t melt. What working mom wouldn’t want to hear their child’s voice in their most powerful moment? (And that gentleman standing next to her- none other than Frank Gatson Jr., by the way.)

#8: When she announced her first adidas x IVY PARK collection. 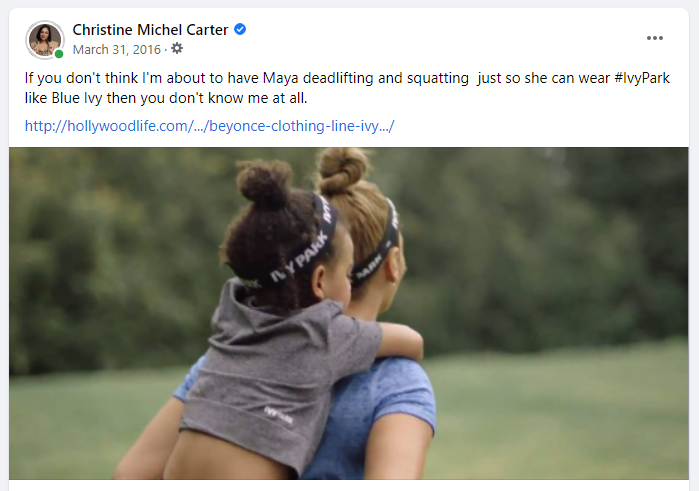 I’ve heard she ensures her daughters have matching versions of all her outfits, which after seeing subsequent IVY PARK collections I 100% believe. But this first drop, where the commercial featured Blue Ivy… it was too much for my mind. I did of course buy IVY PARK, because… Beyoncé. 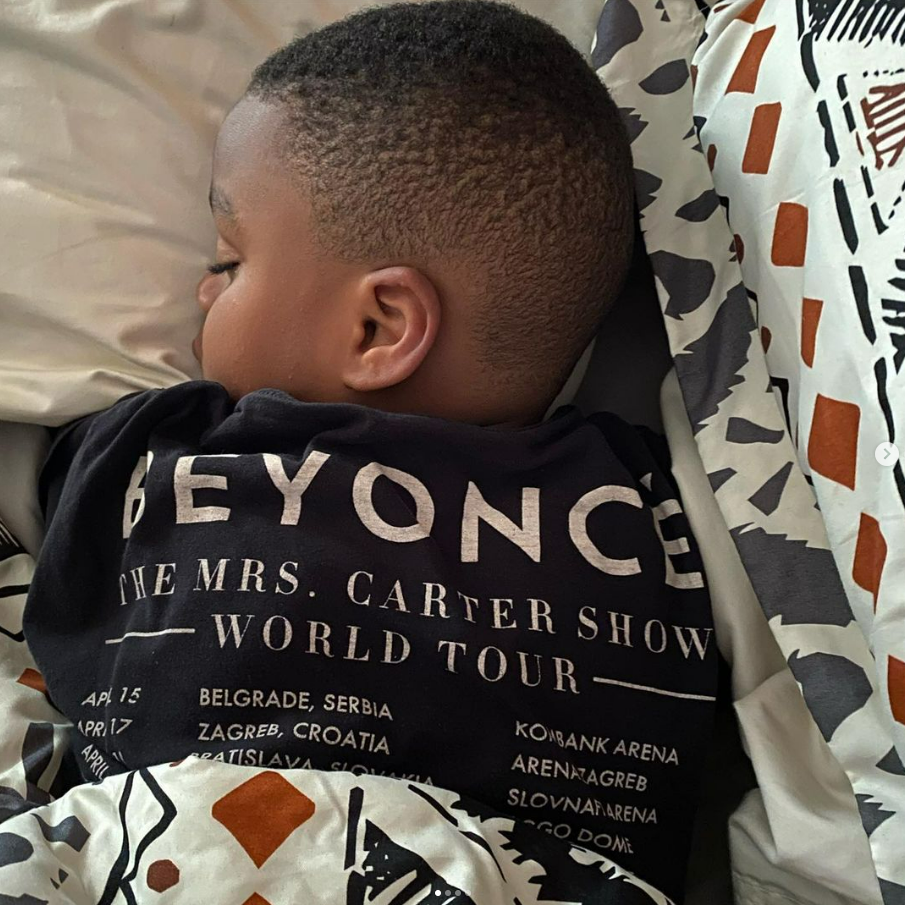 Just trying to figure out how to balance being a mother …. and giving myself creativity and physically. It is a lot to juggle.

No truer words were ever said, and they came from King B herself. But when I’ve watched her on stage (and yes, I’ve paid thousands to have VIP tickets to do so, despite the fact that I won’t pay for my kids to go to private school), I would never know it’s a lot for her to juggle. 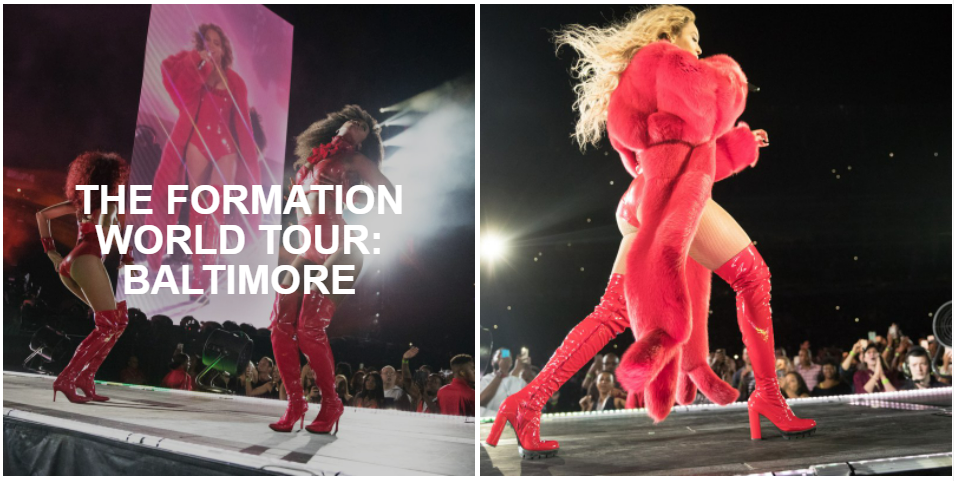 Yes, that is me in between her legs on the bottom left with my ex-husband, when she came to Baltimore.

#6: When Beyoncé tells you about how she is unapologetically raising her kids via her song lyrics.

Boy, you know you love it
How we’re smart enough to make these millions
Strong enough to bear the children (Children)
Then get back to business

I like my baby heir with baby hair and afros
I like my negro nose with Jackson Five nostrils
Earned all this money, but they never take the country out me
I got hot sauce in my bag, swag

From releasing “Grown Woman” after she gave birth to admitting motherhood makes you not feel like the woman you once were on “Mine”… I mean, there are too many lyrics for me to cite! But why I love this line from “Formation” in particular, is because I too battled people telling me I should do this and that and the third to my daughter’s hair. It even inspired me to write a piece for Harper’s BAZAAR. I never permed my daughter’s hair, and I didn’t listen to hair care advice from other people. Why? Because f*** ’em, that’s why.

#5: When I walk around my house and see her face.

She also hangs in my kitchen, pregnant and on a sandwich, of course (bottom middle). 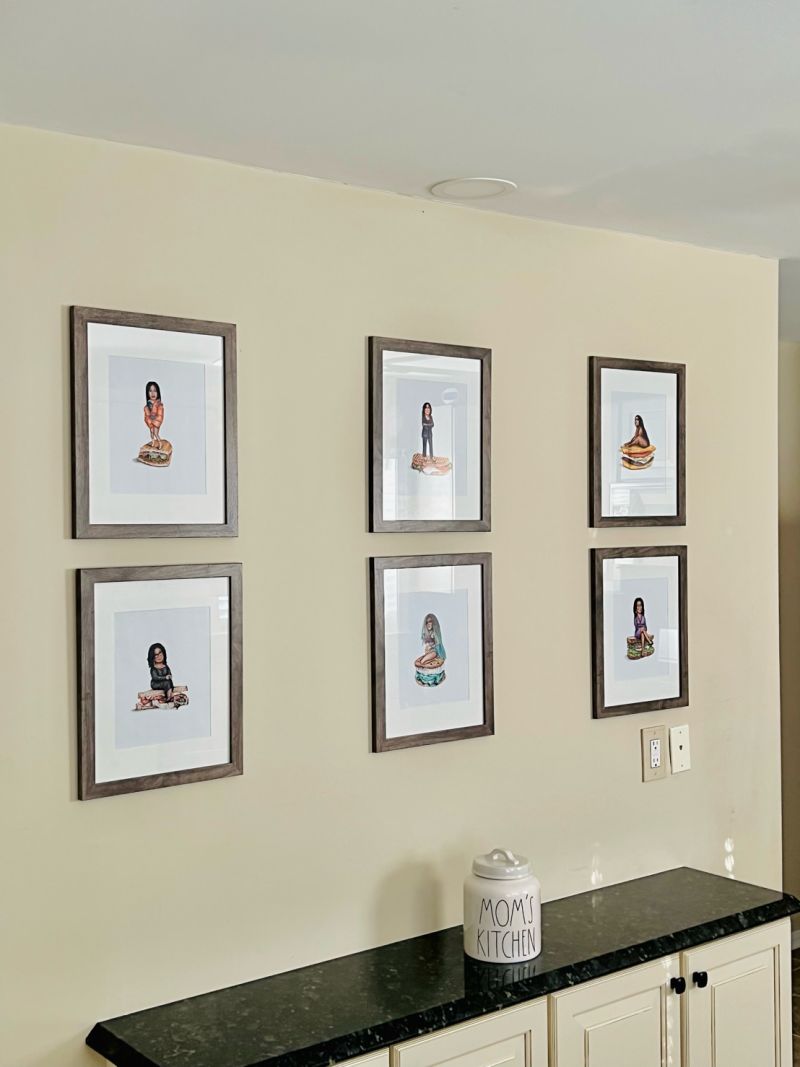 #4: When I thanked her before thanking my parents in my book, MOM AF.

In all moments of praise, we must thank our Suga Mama, who art in L.A. or NYC, hallowed be thy sweet ass frame. Thank you for being such an inspiration. We don’t deserve you, and by we, I mean black women, black men, and humanity periodt. I love you, girl. If I ever meet you, I’m gonna be like Jerome was all over Pam Grier, singing, “I Wanna Get Next to You” at the Players Ball.

Yes, Kenneth Epps and Marsha Parham, I took the time to make a special paragraph about Beyoncé but didn’t call you out independently. Deal with it. (You’ll both have a problem with that, proving you are, in fact, just alike.)

#3: When she turned her babies into a brand too.

I love the fact that BLUE IVY CARTER™ (Serial Number # 86883293 by the United States Patent and Trademark Office) is a claimed right by her momma. You not only gonna put some respeck on her daughter’s name, you’re gonna pay to use it on merchandised goods. Because Blue Ivy Carter is a book narrator and Grammy-award winning artist. Yasssss!

#2: When Beyoncé talked about having preeclampsia.

“I had an extremely difficult pregnancy. I had high blood pressure. I developed toxemia, preeclampsia. And in the womb, one of my babies’ hearts paused a few times so I had to get an emergency C-section.”

I too, like many Black women, had preeclampsia during my pregnancy. Maya was a preemie born at 2 lbs. 12 oz. and I was doped up through the whole experience of being in labor for FOUR DAYS. I laughed off seeing her because selfishly, I didn’t want to get attached to her and then lose her.⁣ There are some NICU moms, preemie moms and first time moms who need to know they’re not alone, and Beyoncé knows this too. 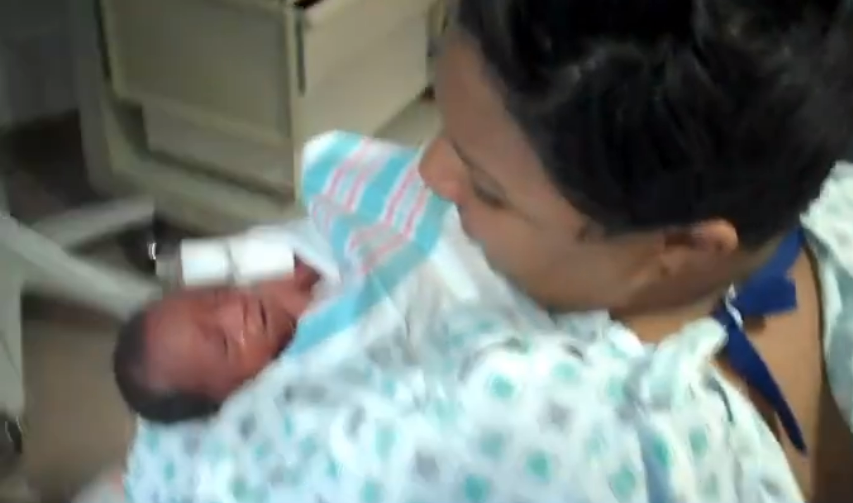 #1: Because at the end of the day, Beyoncé is just a glorified juice box holder, just like us everyday working moms. 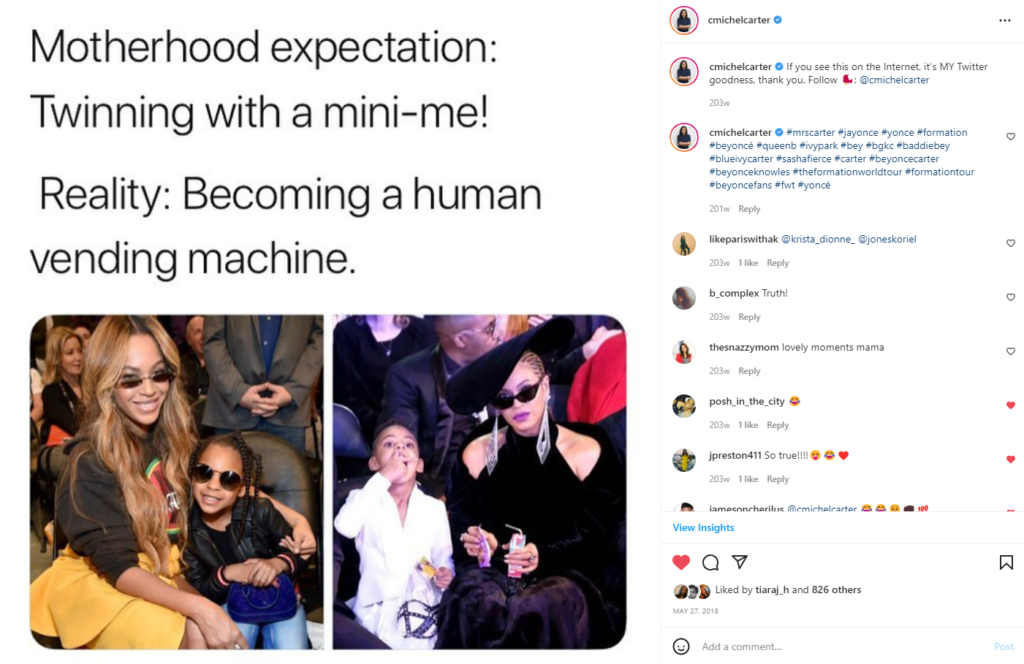 Clearly Yoncé stays on my mouth like liquor (did it again, Stans). I had so many screenshots of tweets and posts I could’ve shared, it was easy as hell to name ten reasons she keeps me motivated as a mom.. This article took three minutes.
All jokes aside, working motherhood is tough, even if you are worth $1 billion+. I wish this queen nothing but success, peace, and joy, because that’s what she’s been inspiring in me for decades. And you know, should anyone know Queen Bey, please tell her, I love her. I leave you with one of my favorite quotes of hers:

Bio: Featured in The New York Times and The Washington Post, Christine Michel Carter is a best-selling author, award-winning advocate, and the #1 global voice for all moms⁣. She helps women navigate the significant impact of motherhood on their professional careers. She elevates the honest truths of working motherhood as a Senior ForbesWomen Contributor, the author of the children’s book Can Mommy Go To Work?, and the author of the adult novel MOM AF.

She is also a working parents and women’s ERG subject matter expert; employees have ranked her signature mental health talk the best corporate programming event of the year. She’s also worked on the maternal initiatives of Vice President Kamala Harris and received a Congressional Citation from the U.S. Senate for going “above and beyond in ensuring that Black Moms and Moms of Color have access to important health information for their children and families.”