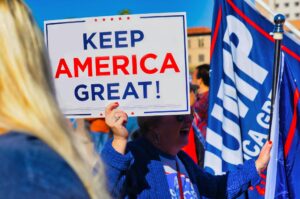 A podcast host recently asked me what I was teaching my daughter about President Donald Trump, I was happy to provide an honest answer.

“Nothing. I’m teaching my daughter nothing about Donald Trump. She will know Donald Trump is our nation’s 45th president. And it will end there.”

I’m not sure if you’ve noticed, but we’re living in disturbing times.

I believe the latter of these three issues agitates and encourages the two formers.

Therefore, what I will teach my daughter is politics, democracy, power, humanity, social injustice, freedom, liberty, and reform. Besides, President Donald Trump knows nothing of these concepts, so the conversations can easily remain mutually exclusive.

When I was 6 years old (in 1992) as my daughter is now,  I saw a successful, competent woman standing next to Bill Clinton (then president). That sparked my interest in political and social affairs.

She was a woman who I came to learn had been a board chairman. The first woman ever to sit on Walmart’s Corporate Board of Directors. I didn’t look like her, but she resonated with me because she was a woman I could aspire to be.

In comparison, my daughter has Melania Trump.

For that, I feel sorry for her.

I could teach my daughter when an American citizen peacefully protests police brutality against people of color.

Or when people are dying due to natural disasters against their control, they shouldn’t be chastised for disrupting the nation’s economy.

Or that the murdering of an LGBTQ American citizen shouldn’t be a joke.

And citizens shouldn’t fear that a nuclear war with another country depends on whether their president received enough retweets that morning.

I could teach her all those things and more, but I won’t.

My point simply is this:

“We parents can choose to sigh and scoff at every Trump blooper on the morning news, or we can internalize our angst and use the countless moments he’ll give us for the next three years as coachable moments. “

Above all, teach them, the world we live in, and what our nation is supposed to stand for, so their generation doesn’t make the same dumb ass mistake.